Basically, discs are little fluid pouches that are very conveniently placed between each of your vertebrae so that the vertebrae don’t grind against one another and don’t have to absorb a lot of the shock from the basic impacts of everyday life. They are essential for the functioning of the spine, and they are held into that area by a muscle-like lining. 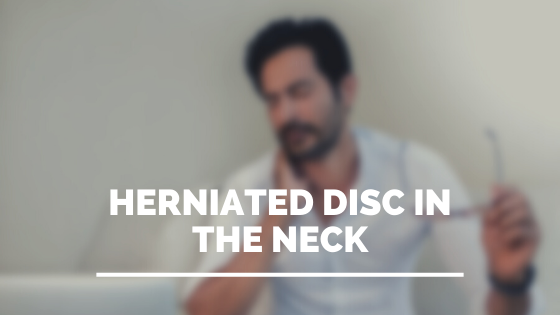 The problem is that these little linings become more rigid through your life, and as such, they become easier to break, so if you put some strain on that particular part of your back, the fluid will leak through the lining, usually putting unwanted pressure on your spinal cord and causing what can be a significant amount of pain.

This can happen to the discs between any of the vertebrae, but it usually happens in the less protected parts of the spine, which is to say anything that doesn’t lie within the ribcage. As such, the vast majority of herniated discs are either in the neck or the lower back. The neck is a pretty serious place to get this for a number of reasons. See, the spinal cord is mostly protected by surrounding bone, but it lies towards the outside of your back. Since most herniated disc in the neck bulge out towards the back, they usually press against the spinal cord, rather than a little more innocuously into the torso.

In the lower back, don’t get me wrong, this can cause serious pain, but the thing is once you get into the lower back, the only nerves that it is usually pressing against are the sciatic nerves, which run up and down the legs. In the neck, there’s a lot more to press against, and it can cause problems in the nerves of any of your extremities. When a disc bulges out onto any of the nerves, it can do a number of things.

First, it will likely make the back hurt in that particular area. Then it will make the area of the nerve it is pressing up against do a few things too. They might feel numb, they might tingle, they might hurt, it all depends. But regardless, it’s unpleasant. So how do you fix it? Well, for the most part, herniated discs heal on their own. They will eventually go back into the spine in a few weeks and stop hurting. You are considering herniated disc neck surgery, but before I tell you about that, I want to go over a few of the other treatments so you know what you can do. Now is probably a good time to note that I am not a doctor, and that nothing I say should be taken as medical advice. If you are thinking about getting herniated disc neck surgery, you need to talk about it with your doctor or other medical health professional, as you should with all major health decisions.