For over 100 years, neon lighting has lit up big city streets with a colorful glow. Cool dude, Georges Claude, invented neon tube lighting in the early 1900s, showing off his work at the Paris Motor Show in 1910. It was a huge hit in France, but the United States didn’t catch on to the hip lighting style until 1923. Earle C. Anthony purchased a couple of signs for his Packard car dealership in Los Angeles, California. The style quickly became popular all across the U.S., characterizing popular resort towns like, you guessed it, LAS VEGAS.

Most people I know who have neon signs now like them for the nostalgic retro vibe. Most of men decorate their man cave walls with neon signs, and handful of bars and clubs that still sport neon signs. 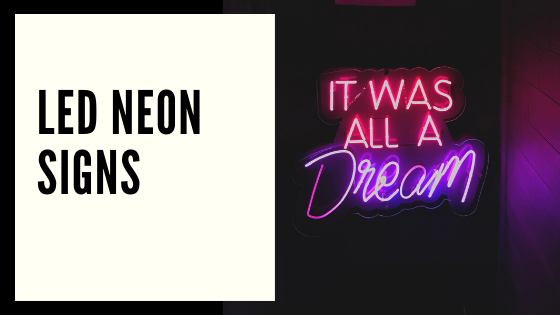 So even though neon lighting hasn’t been insanely popular in the last forty years, signs are still being manufactured and sold – thank god. If you’re interested in learning more about neon signs, I put compiled a short list of the most popular neon sign categories. Check it out:

Obviously the most popular category because who doesn’t love beer and alcohol? I’ve seen this kind of neon sign most often in man caves and bars, but they look great in other places as well. There are a ton of different styles, so Budweiser connoisseur’s can get their favorite sign and plain old beer lovers can add to their simple decor with a foamy beer mug.

In the heyday of neon signs (think 1950s), many restaurants and businesses displayed their names in bright neon lights. More people started driving longer distances in the 1950s, so businesses used the neon signs to attract customers. Pretty smart idea. Inside and outside these businesses customers would find additional neon lights that the business used to advertise their products and services, such as Coca-Cola. The Las Vegas strip is probably the most famous example of business neon signs – if you find a business that isn’t lit up on the street, then something is definitely wrong.

Where would America be without her sports? This category is another popular one among men; I’ve seen quite a few in my friends’ man caves and some sports bars. Most public places that have sports signs display uber-popular NFL and MLB teams. A quick browse of the internet proved what I already know – sports signs range all across the board: NFL, NBA, MLB, NHL, even swimming!

Car dealerships, gas stations, and automotive shops across the United States would advertise their business and services with neon signs. A lot of these signs came down, when cheaper lighting alternatives were invented, but you can find new and old signs from various dealers.

I’ve found that motorcycle neon signs are mostly in biker bars, which are a lot of fun. If you’re not particular about style there are simple motorcycle outlines, and there are more elaborate signs if you’re into that.

Big Rig neon signs are a real thing. I haven’t seen these in any particular places (other than the internet), but I imagine they would look cool in a truck stop diner.

There are a few other bar/man  cave – type neon signs that don’t fit into their own category. Some popular signs I’ve seen in man caves are beer/alcohol, pool/billiard, and cars, but anything that reflects the interests of the owner is fair game – for instance, ladies’ men like women’s outlines and often use a pink neon sign to light up their spaces.

Bars are more likely to display their services and activities, such as pool, beer, and poker. Strip clubs are pretty similar, but they draw clientele in with large neon signs of half-naked women or a phrases like “Live Nudes” – works for me.

Popular culture refers to movie, music, and other icons of the late 20th and early 21st century. Basically these signs take the form of titles/names, phrases or figure outlines (ie. guitar). I find these way more exciting than foamy beer mugs, but beer buffs may disagree with me.

If you’re like me, wishing there were more popular culture options, you can buy a customized neon sign from select manufacturers. Pretty cool, right? I think so.